Victor Ortiz Deserves that Cheap shot Maywether gave him on the 4th Round, Ortiz was headbutting Mayweather through out the fight, And his team Complain about Mayweather's  elbows and that he is a dirty fighter before the fight with Referee Joe Cortez, Even though I was rooting for Ortiz to win but hey , Protect your self at all times in the ring. There should be any apologize and hugging in the ring, with Mayweather. Ortiz Inexperience cost him the fight. So should there be a rematch? I don't think so. Mayweather was winning all  4  rounds. I would like to see Mayweather Vs. Pacquiao , though during the Post fight press conference Mayweather said he doesn't need Pacquiao anymore. 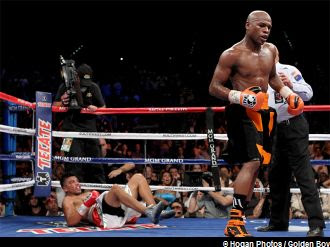