War, this is what comes into my mind when I see these two in the ring, Im just hoping HBO,Ref,Judges,etc...brings a good fight and not a controversial end.
Marquez will fight for Pacquiao's WBO Welterweight Title.
Also The Under Cards,
Timothy Bradley Vs. Joel Casamayor, Casamayor will fight for Bradley's WBO Junior Welterweight Title
Mike Alvarado Vs. Breidis Prescott, 10 Rounds, Junior Welterweights
Luis Cruz Vs. Carlos Burgos, 10 Rounds, Junior Lightweight 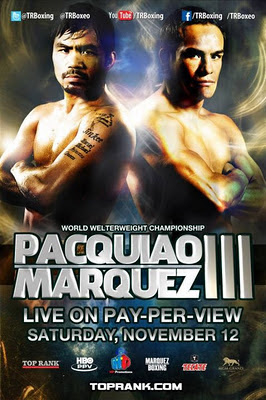 
UPDATE: Manny Pacquiao Beats Marquez, After a Controversial End,So the question is , Did he really beat Marquez? He sure did,
He threw more punches,Landed more punches and was the aggressive fighter, If Marquez wanted to be Champion, He has to do better than want he did during the fight. Sure he landed clean power punches, but it wasn't enough to take the WBO Welterweight Title.So should there be a Pacquiao Vs. Marquez 4? Forget about it. He needs to Retire.