Mayweather vs. Cotto: 5 Reasons Cotto Could Pull off an Upset 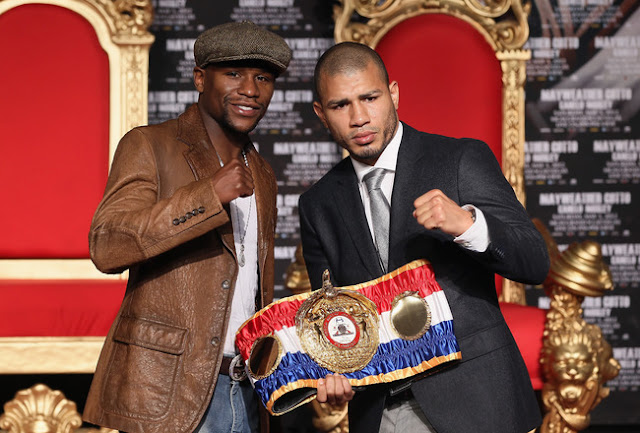 by: Leo Reyes
Unbeaten boxing star Floyd Mayweather may have made a terrible mistake in choosing Miguel Cotto after future foe Manny Pacquiao rejected his guaranteed offer of $40 million for the May 5 encounter at the MGM Grand Garden Arena in Las Vegas.
Critics and boxing analysts say Cotto is dangerous opponent. Even pound-for-pound king Pacquiao warned Mayweather about Cotto's awesome power, calling him a "hard hitter." The Filipino star, who fought and won via TKO over Cotto in 2009, said it will be a difficult fight for his future opponent.
At 154 lbs., Cotto could ended be dangerous because he fights like a raging bull at this weight level as he did during his recent encounter with Antonio Margarito at the Madison Square Garden, winning via a ninth-round TKO.
Those who root for Mayweather, though, say otherwise. They believe Cotto is no match for Mayweather's skill and ring experience.
Still, others who appear to be neutral even if they are not may have good reason to believe Cotto will be the first boxer to give Mayweather his first embarrassing defeat, and there are five reasons—at least—why Cotto could indeed be the first one to give Mayweather his first loss on May 5.
First and foremost is Cotto's three-fight winning streak in a span of just a little over two years. The Puerto Rican idol has been in a training camp continuously for almost three years, which contrasts Mayweather's limited ring exposure since late 2009.
Second, Cotto has been campaigning lately in the light middleweight, and at 154 lbs. he will be hard to beat. Critics say Mayweather made a mistake by agreeing to face Cotto at 154 as he needs to put in extra poundage, which could slow him down.
Third, Mayweather's inactivity, which totaled close to 16 months until he fought Victor Ortiz in September 2011, will be a factor. And since he only fought four rounds with Ortiz, it could be considered as just one of those sparring rounds inside his gym. Without counting his controversial fight with Ortiz, which ended in Round 4, Mayweather has been practically out of boxing for the past two years.
Fourth, age could be catching fast on Mayweather, who—at 35 and four years older than Cotto—could be considering retirement for good. Facing the prospect of losing his untainted record is a difficult situation for the unbeaten boxer. And with with an unwanted trip to prison right after his ring encounter with Puerto Rican star, Mayweather has a tough time ahead of him.
Fifth and finally, Cotto is hungry for recognition and will definitely use his excellent physical conditioning and his weight-level advantage in his strategy to counter Mayweather's experience and superior skill.
A spectacular win over Mayweather, who is unbeaten in 42 outings, would give Cotto another shot at Pacquiao for the second time. And if that fight happens, it could be Cotto's richest fight of his awesome boxing career.